Summer has arrived and the Northern Rail Trail is a popular place with folks on foot and on bikes. It is time to complete the final four miles of trail into West Lebanon. It’s been three years since the Mascoma River Greenway Coalition started work on the project: We have raised $1,600,000 toward our goal of $2.2 million — remarkable support. Thank you to all who have given donations, grants, in-kind work, and pledges.

Two weeks ago, we opened our fundraising campaign to the community as a whole, celebrating with a kick-off in Colburn Park on June 7th, and a guided walk down the trail. In the days prior to the walk, rails and ties along the trail were moved aside. We were excited to have many of you join us on that day.

We have planned and enjoyed presenting at neighborhood house parties to promote the Greenway, increasing community awareness and building a base of support. Those at the parties have been generous with their suggestions, time, and pocketbooks. Thank you to all who have donated.

We are seeking others who would host a neighborhood gathering in support of the Greenway. Please contact Rainie Kelly ltompkinskelly@gmail.com to set up such an event. Paul Coats and I would love to come out to spread our personal enthusiasm for the project, and watch our neighbors’ faces light-up.

As we begin decking and railing work on the Greenway bridges, we need volunteers with experience in carpentry to assure safe work and construction. If you have experience in carpentry and can donate the time and energy, please contact Paul Coats at paul.coats@lebcity.com We are working on the downtown bridge this Friday morning June 27th and most of the day Saturday, perhaps Sunday if necessary. We need 6 qualified volunteers. Thank you for considering.

I would like to offer special thanks for those who have worked on the opening of our public fundraising campaign. Those include: The Guys Band, Tuck Rock DoJo, Donn Cann, Gail Wasson, Laurie Harding, Rainie Kelly, Upper Valley Trails Alliance, Timken, Hypertherm, Geokon, and all the friends who showed up to pull spikes, share stories, escort on the walk, and clear brush. And especially those who brought their checkbooks. You are all incredible. 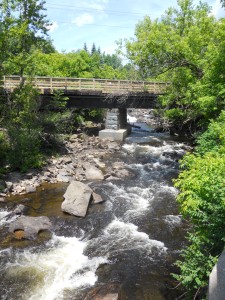 This entry was posted in Mascoma River Greenway Updates. Bookmark the permalink.

One response to “Looking for a few skilled carpenters, hosts for Greenway House Parties . . . and financial support!”