Have you spotted interesting wildlife along the MRG? Taken photos? Some of us have seen herons, pileated woodpeckers, kingfishers, mergansers . . . others have seen woodchucks, beavers, deer, foxes, snapping turtles, and even an occasional bear. We’d love for you to share your photos and stories of wildlife spotted on the MRG. You can submit photos and stories to mcgovern.patricia(at)gmail.com

Dan writes: “Most were taken in the early morning hours between 0430 and 0630 in the Spring, Summer and Fall of 2020. All were taken on the MRG at various locations.”

“The Fox Kit was just sitting by the shed of the second house on the right after the second MRG parking lot on Mascoma Street one morning. He’s part of a fox family that I see all the time near that second parking lot.” 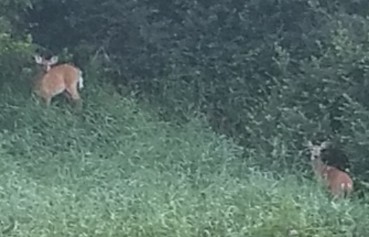 “Deer I see all the time either near the bridge over the Mascoma or at various locations between the second bridge crossing at the dam and the power lines.”

“‘I’ve had two bear encounters on the MRG . . .The second happened around the third week of October, around  the time that Mink was found dead on the sandbar in the Mascoma. As you know, one of her cubs was killed by a bus and the other was captured over in West Lebanon. The whereabouts of the other cub wasn’t known. So . . . I was walking the MRG around 0430 with my headlamp on right above the Vivo Salon and Jake’s Market on Mechanic St. in Lebanon. I was looking ahead and could see some reflection back toward me where I knew there was nothing that could reflect back. I kept walking and the reflection disappeared. Next morning, same time, same place, same circumstances, a reflection was straight ahead. As I walked, the reflection was coming toward me. I figured OK deer, fox or skunk. Reflection still coming. Next thing I know, about 20 feet in front of me, shining in my headlamp is a bear cub. We both stop and it’s a contest as to who’s going to move first. I took one step forward and the cub made an immediate left hand turn and scrambled into the gully behind the big white house next to the MRG parking lot at the entrance to APD hospital and was gone. It moved so fast I had no idea if it had climbed a tree or ran past the house and crossed Mascoma St onto APD’s grounds. It was gone. I called Lebanon/Hanover Dispatch to say that I had probably just seen Mink’s last cub and gave Dispatch it’s location. I told them it was probably feeding off dumpsters at Vivo Salon and Jakes and houses along Mascoma or Mechanic Street. Two weeks later cub was caught in trap baited with donuts behind Tractor Supply dumpsters on Mechanic Street about one mile down trail from where I had seen it.” (Postscript: This cub “Lori”, was reunited with his brother “Chief”, at Ben Kilham’s Bear Center in Lyme, NH.)

“Until the first big snowstorm, I usually walked the length of the MRG every morning from 0430 to 0630. I usually have a headlamp on so that I can watch out for skunks, fallen tree limbs and crazy bicyclists who don’t use any headlamps even though it’s pitch black out. I also like the headlamp because you can then see what’s in the woods looking back at you. A week before I took the Owl shot, I was about to cross the wood bridge going downhill from Renihan Meadows area. It was pitch black out and I heard a rustling in the trees right above my head. I looked up with my headlamp and there was a Barred Owl looking back at me right over my head. It was sooo cool. Then about a week later, I was out on the Trail, halfway between the powerline cutout and the P&C access road. I just happened to look right up the ridge line and saw a Barred Owl. Next thing I know, the owl flies right down to the edge of the trail and perched himself on a limb only about ten feet from me, and just sat there. I couldn’t believe it. I took the shot.” “The MRG has been my Mental Health salvation during the pandemic. The wildlife encounters are a definite bonus.”

Thanks to Dan for sharing these wonderful photos and  experiences!

Thanks to Tarrah Sweatt for this wonderful photo of a turtle laying eggs about a 100 yards from the Glen Road MRG Access. 6/10/2020

“I’ve seen this fox and other members of its family many times,  on and around the Greenway close to Slayton Hill, usually in the morning on my commute to work. The family had several kits this year and I first saw them cross the trail when they were very small. Just a few weeks later they had grown much bigger.”

“I was biking on the greenway with my son when I saw the bear down in the Lower Meadows. It was far enough away that it wasn’t a scary experience. It was the first time either of us had seen a bear. We watched it until it wandered off down to the river.”

Thanks to Colin Smith for these photos and stories

Another fox sighting near the Slayton Hill area – thanks to Cy Young:

“The picture was taken back in May near the lot west of the underpass, a bit west of there. It wasn’t too afraid, but I had no intention of getting too close and that shot is a bit of a blowup of the original photo. I was walking from my home in West Lebanon to town taking advantage of the access provided by the trail (too bad it stops at Glen Rd!”) 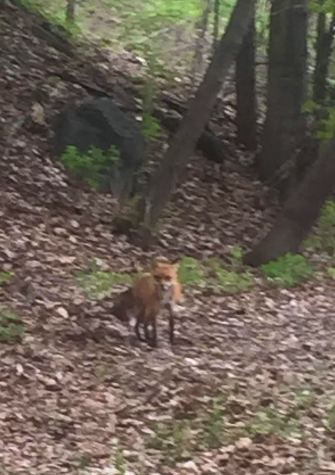 (We want Cy and others to know the MRG is still a work in progress and has been for at least 15 years. The hope is to eventually reach Vermont by way of the Westboro Yard in West Lebanon. More info   Glad to know you travel by trail Cy!)

“Ran into this guy or gal who was taking sweet time crossing the MRG trail.” 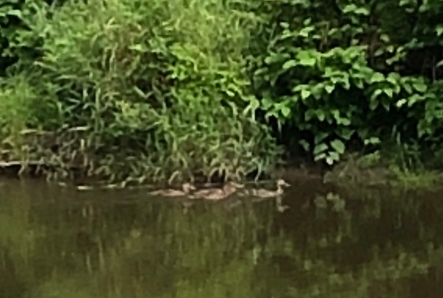 “Mother duck leading the way along the MRG”

“Not sure if this was a beaver or river otter but it swam around for quite a while.”

Thanks to Roger Lohr for his photos and stories. (Roger has written about recreation on railtrails.) It is exciting to know more about the life of the MRG and the importance of this corridor for both humans and wildlife.

(Larissa Pyer also reports having seen a beaver on the banks of the river- she named the beaver Brian.)

Thanks to Dan Moriarty for his MRG wildlife story:

“I walk the MRG about four times a week at various times and have since before it opened. I’ve seen otter, fox, beaver, numerous deer and fawns, various ducks, geese and birds at various locations. I usually walk from the APD parking lot to the gate at the intersection of Glen Road and then back to the trail marker opposite Lumber Liquidators and then back to APD parking lot.

Last early October, I walked the trail at first light on a foggy dark morning. I like to walk at that time on the chance of seeing wildlife and because it’s so quiet with no one on trail. I had just crossed over the bridge on the downhill section near Renihan Meadows toward West Leb and was near the high tension electric wires when I had the sense that someone was coming up behind me. I looked back toward the bridge and could see a shape through the fog coming toward me and thought that it was an early runner who was coming pretty fast. I continued walking and didn’t hear anything and was anticipating that I’d say hello to runner in a couple of seconds. I turned to my left to see where runner was to say hello. About fifteen feet behind me was a bear coming fast. I didn’t even have time to react. He took an immediate right turn off the trail and plowed down the hill toward the river right under the electric wires. He was gone in a couple of seconds. I know nothing about size or maturity of bears other than to say he was big.

I’ve seen lots of bears in Upper Valley having lived in Cornish and in my neighborhood in Lebanon. I’ve seen them at a distance in Northern NH and ME. I’ve also seen many Grizzlies in Alaska and British Columbia in my travels. I’ve never though had the “up close and personal” contact that I had with the bear on the MRG. I never heard him coming. I just had the sense from being in the woods over many years that something was behind me.

So bottom line lesson is pay attention to your surroundings when on the MRG. Forget about wearing headphones and occasionally turn around to see what might be behind you on the trail especially in the early morning or at dusk.” 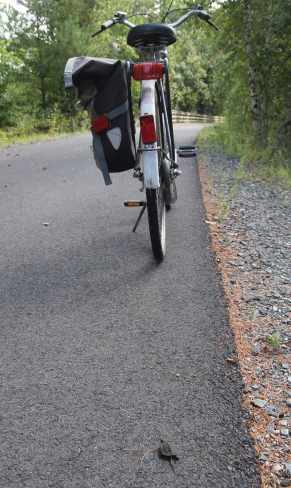 “East of the highway overpass, there is an oak tree on the north side, and a fence and Longacres greenhouses on the south side. Baby snapping turtles are crossing there – I think they are emerging from a small hole in the gravel just east of that oak tree.”  – Sarah Riley. September 2019

The kind of “wildlife” we are hoping to see along our MRG Pollinator Corridor! 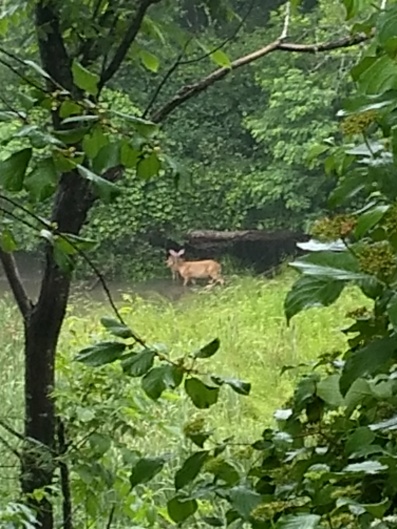 Hummingbird moths are pretty wild too! They buzz, hover, and fly from flower to flower like hummingbirds, have long tongue-like proboscises like butterflies, and antennae, colors, and furryness look like bumble bees . . . and the tail is like that of a lobster!  This one lingered longest on the liatris in the pollinator garden west of the underpass by APD. –  Pat McGovern 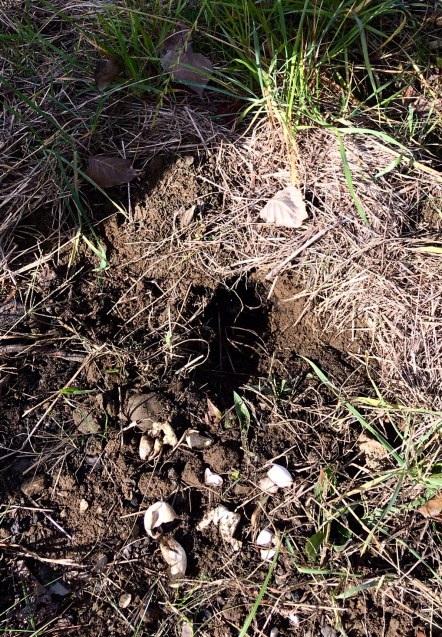 As we planted perennials on the riverside ledge by the Price Chopper access to the MRG, we spotted turtle eggshell remains, in and outside this hole. Hard to imagine how a turtle made her way up the steep rip-rap embankment to lay eggs in this slag-filled soil!  – Pat McGovern