“Tell-Tales”: a Bit of Railroad History 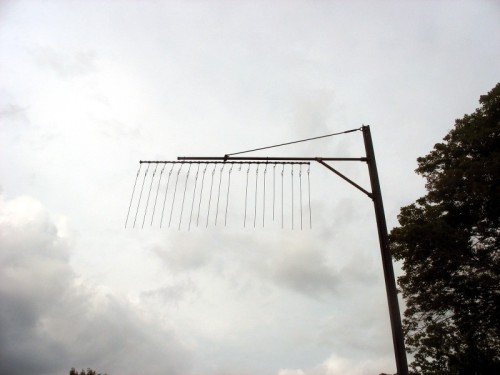 As you walk or bike along the MRG, keep an eye out for “tell-tales” as seen in the photo above. For many years, tell-tales were important structures found along railroad tracks.
Prior to the modern era of air and pneumatic brakes, a brakeman was required to scale the tops of freight cars, while the train was in motion, and manually set each car’s braking system. This practice was extremely dangerous, making the position of brakeman one of the most dangerous within the industry.  The purpose of the tell-tale was to warn the man, who was concentrating on the job at hand, that an impending obstacle, such as a bridge or tunnel, was imminent down the line. (If he were facing in the opposite direction from the danger, the rods hitting him on the back or the head  would give an instant warning to duck or scramble down the end ladder.)
Thanks to the invention of the airbrake, the practice and need for tell-tales ended. However, many of the structures can still be found along railroad tracks, a historical reminder of the early years of the industry and its dangers.
This warning system was not only useful for the brakemen, but for those boxcar riders who hitched free rides on top of trains:

by Tri-State Tom »” And for the youngins here, the origin of ‘Tell Tale’ in railroading is short for ‘dead men tell no tales’. They were a quick alert device for a car ‘rider’ atop a freight car in transit to DUCK or HIT THE DECK in advance of an overhead bridge or tunnel. “

This entry was posted in Railroad History. Bookmark the permalink.

2 responses to ““Tell-Tales”: a Bit of Railroad History”